Why "oh well" should become an author's favorite words

On the eve of the 3rd anniversary of my debut novel, I HEART YOU, YOU HAUNT ME (I know. Three years? Really? Wow!) I've been thinking about the realities of being a published author. So, lucky you, you get to hear some of my rambling thoughts today.

Many writers pursue publication for years.

And when it finally happens, when a hard working writer finally gets the deal, he is ecstatic. Like, over-the-moon happy.

It's going to be a BOOK! A real, live, honest-to-goodness book that people can pull off of shelf, open the cover with his name on the *front cover*, and read. Yes, people will read the words he sweated and slaved over, trying to create a story that would move a reader, amaze a reader, and stay with a reader for a long, long time.

Cartwheels are done. Champagne is popped. Gratitude is expressed right and left, up and down for the opportunity to be published. It feels SO good!

But often, after weeks or months of dreaming about the book out in the world, the vision starts to shift. It's not just an imaginary shelf somewhere, it's a shelf in Barnes and Noble, and every single one of the independents across the country. The author may start to imagine the book face out on the "New Releases" shelf. Or, even better, "The Best of..." shelf.

The author starts to wonder about reviews. Will they be good? Will there be *stars* involved? If it's starred, lots and lots of libraries will pick it up. Awesome. Maybe it will make special lists, or maybe, even better, it will win awards! Awards? Oh my word, it could win awards!!!

Hope is abundant in those months leading up to the release. And it makes sense, doesn't it? Hope kept that hard-working writer going, year after year, despite the rejections that piled up. Hard-working writers live and *breathe* hope.

And then, the day comes. The book is out. And here is where, for too many authors, it all goes to hell. One or both of the chains pass, so when the author goes to find it in a bookstore, he can't. Furthermore, it only gets one or two reviews, and they are so-so. One of those might even be bad. Buzz around the internet is for other books who have a big publisher push behind them. And the author wonders, why? Not just one why, but a hundred whys. Why didn't the bookstores want to carry it? Why didn't my publisher want to market it better? Why didn't I get a book tour like other authors I've seen at my book store? Why, why, why?

The elation the writer felt when the champagne was popped has vanished, and in its place, the writer finds disappointment and feelings of failure.

The big question then becomes - what next.

In the months leading up to the release of I HEART YOU, YOU HAUNT ME, I wrote like a crazy person. I had one novel ready to go and another novel started. The completed novel was rejected. That's the way it goes sometimes. But the other novel, what eventually became FAR FROM YOU, became the novel I worked on in those months immediately following the release of I HEART YOU.

Now, yes, I HEART YOU made it into bookstores. It got pretty good reviews (no stars though). It sold well, and in fact, much better than I think anyone expected. And sure, I was happy about that, of course. How could I not be? But I had let it go a long time ago, in case none of those things happened. I had mostly released it from my mind and my heart, wished it well, and moved on.

Now some will say, No, no way Lisa, you don't know what it's like. You can't relate. You haven't really been there.

But I can relate because none of my books have sold as well as that first book. FAR FROM YOU, my second novel, came out in December 2008, when it felt like the world was about to fall out from underneath us. When people were getting laid off right and left and it felt like a second Great Depression was imminent. Expectations were high for that book based on how well I HEART YOU did, and guess what? Books were returned to the warehouse in droves. And not because it was a bad book, but because that's just how it goes sometimes. Things happen, books don't sell, expectations aren't met.

Yes, you read that right - oh well! It's NOT the end of the world!! And it doesn't have to be the end of your career either. Really and truly, it doesn't.

Remember when you'd query agents and you'd get rejected and sure, you might take a couple of days to be sad over a particularly hard rejection, but eventually you'd say, "oh well," and you'd submit again? So why can't you use those words now, when your book isn't selling the way you'd hoped it would?

I think writers should celebrate the sale. Then, work damn hard on revisions and make it the absolute best book you can make it. And when you send those final pages back, and you've done everything you're going to do on it, you need to open Scrivener or Word, and start in on a new project. Or if you don't know what to write next, brainstorm ideas for a week until you have one. 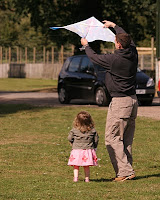 You have to let the sold book go, and let it become what it's going to become. Release it, like a kite. It'll fly or it will fall, but it's out of your hands. And we *must* remember, every book is completely separate from the ones that became before it and the ones that will come after it. Even if you're writing a series, the success of one book doesn't guarantee the success of another one. AND, perhaps even more importantly, the failure of one book does NOT guarantee the failure of another one.

I have seen too many writers crushed after the first book didn't do well, and they're done. They walk away. And these are good writers! I suppose it's the flight or fight response. So you fought all of those years for publication and now, when factors completely out of your control affect the sales of the book, you're going to run away? Someone might argue, but isn't my career over at that point?

Maybe, after the whole rotten experience, some people decide they don't want to be an author. And that's fine, if it's a conscious decision. Believe me, I understand, it's a tough business. But, if you love writing, if this IS what you want to be doing, shut out the noise of the publishing world, open up a document, and write.

You might say, but what about promotion? I have to be out there, promoting my book, I can't shut out the publishing world. Look, let's get real. I have seen authors promote 24/7 for months and months, and their books still didn't do well. You *sold* your book to a publisher. When you've finished writing the thing, your job is DONE. There is nothing else you *have* to do (unless your house sends you on tour or requires appearances of you, I suppose). And I'm sorry, but the promotion we do on our own isn't going to make a whole lot of difference anyway. If you're out there doing school visits and events like that, yes, it will probably make a difference. But skipping out on twitter because you need to write? Don't feel guilty about that.

Writers write. After each book, I kept writing. I kept moving forward. By the time the book was ready to be released, I had something else ready to go out, maybe even already sold.

I guess I want to close by saying - if you've published a novel, regardless of how well it did, be proud of yourself! You have accomplished something that about 97% of the US population dreams of doing. It's no small thing!

And remember how you dreamed of someone pulling it off the shelf, with your name on the cover, and reading it, and just *that* image made you incredibly happy? Well, that happened. Some people read your book. Maybe not as many people as you had hoped, but it's a BOOK, and you've been read! *You* are an author. And everything else that didn't happen?

And I bet at least a hundred people reading this post will think to themselves, I would be SO happy if that happened to me. (And then I ask, really? You really think so? Are you sure, if only *that* happened?). Ha!
Posted by Lisa Schroeder at 5:00 AM

Email ThisBlogThis!Share to TwitterShare to FacebookShare to Pinterest
Labels: a writer's life, Far From You, I heart you, promotion, publishing, writing