Looking for Alaska and looking back

Back in 2005, I had been pursuing my dream of writing and publishing books for young people for about four years. I had signed my first contract for a picture book titled BABY CAN'T SLEEP to be published by Sterling. I was going to conferences and reading as much as I could online about books and authors in the kidlit world. Somehow, I don't remember how, I heard about this book called LOOKING FOR ALASKA. So I picked it up and read it.

I specifically remember closing the last page on the patio, so sad it was over that I immediately began rereading it. I loved those characters. They made me laugh and cry and think. My husband remembers me laughing in bed and asking, "What's so funny?" and me reading parts to him. Six months later or so, I listed the book on my "best of" list on my LiveJournal blog in December, 2005.

When it won the Printz in January of 2006, I did a little blog post about it and who should reply but John Green himself. At that point, he wasn't famous. He was just a regular person, like me, trying to make a go of writing books for kids and/or teens.

So this past week, I watched the adaptation in the 8-part series that's on Hulu. It is so well-done. Truly one of the best book-to-screen adaptations I've ever seen, if not the best. (Please note: it's not appropriate for children. I'd say 14 and up is probably about right).

I'm probably going to watch it again. It's that good. And on twitter I told the producer, Josh Schwartz, how much I enjoyed it and he kindly replied: "Thank you. Everyone on the show was committed to honoring what the book has meant to so many."

I went to an SCBWI conference in July, 2006, and John's editor presented a session that I attended. During the Q&A time, I told her that I had read the book in 2005, before it had won the Printz and how much I loved it and I said something like - "I know the book changed a lot during the revisions, but when you read the book the first time, did you know you had something special?" And I remember her talking about the memories she had as she read it for the first time and knew, without a doubt, she had something incredibly special.

Thinking back to 2005 is a strange and beautiful thing. I was so excited to have sold a book but also wanted so much more. Our community on LiveJournal was special and magical. I was caring for two children, working, and getting up early to write books. In 2006, as the TWILIGHT craze was growing, I thought, what if I try writing for teens? I drafted one novel but just couldn't get it to work. And then, I had a dream about a girl whose boyfriend died but he loved her so much, he didn't want to leave. I woke up that morning with a strong sense of love, went to my computer, and started writing. It was different, a little strange even, but man, was I excited about that book. I wrote this (and more) on my livejournal blog after that first exciting morning or writing.

A new story is inside meand now starting to appear to meoutside of me.On paper.Where it can becomewhat it is meant to be.It haunted me all night.Haunted is exactly the right word.It's a titled A Haunted Love Story.It's written in free verse.I could write it all day longif only I could write all day long.But there's that thing called work.So, Ava and Jackson,I will see you again,later on,if not on paper,then in my dreams.

I love LOOKING FOR ALASKA for the characters and a whole lot more. But I also love it because it reminds me of those days early in my career when publishing was new and exciting and anything and everything seemed possible. John Green's debut novel has been MUCH more successful than mine, but I HEART YOU, YOU HAUNT ME hasn't done *too* badly, as far as debut novels go. It's still in print, 11 years later (and in its 11th or 12th printing). A lot has changed in the YA world since 2005. But one thing I know for sure, that Josh and John reminded me of this past week - it's all about the characters. Watching his show made me want to try writing YA again. Maybe I'll be successful in publishing something, maybe I won't, but if I can find characters like Ava and Jackson that make me excited to sit down and write every day, at least I'll have fun. And that's what it comes down to me these days - the writing better bring me joy, or why even bother? Oh, and I also want to try writing a screenplay. Because...why not!?

Posted by Lisa Schroeder at 11:10 AM No comments:

The last six months, I've been working on a new novel and I can finally tell you about it! 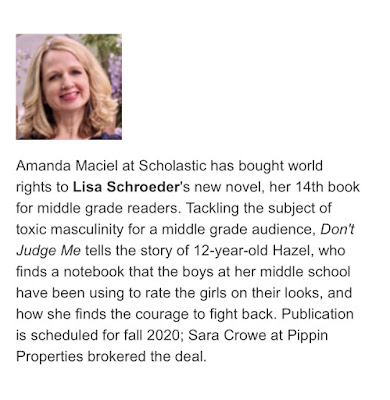 So yes, the new title is DON'T JUDGE ME, which I really like even though it's much different than what I was using for my working title. This was a tough one so I'm thankful that my editor kept working at it until she found something that is pretty powerful and also memorable, I think.

Not sure when I'll have a cover to share, but I'm guessing it will be in the next couple of months. In the meantime, I'm going to try and get back to blogging more regularly. I deactivated FB although before I delete it entirely, I want to go back and direct people to subscribe to my blog here so they can get updates and news that way. I'd love to return to sharing writing tips, books I've read and enjoyed, and maybe some interesting publishing tidbits. Since I have a regular job alongside my publishing career, there isn't a lot of extra time, but I want to try and make more of an effort.

As always, thanks for reading. I appreciate your support!


Posted by Lisa Schroeder at 4:48 PM No comments:

Email ThisBlogThis!Share to TwitterShare to FacebookShare to Pinterest
Newer Posts Older Posts Home
Subscribe to: Posts (Atom)
This is the official website of author Lisa Schroeder. You will find information on me, my books, school visits, upcoming appearances, and much more. If you are a teacher or librarian interested in scheduling a Skype visit with me, there is more information HERE. Thanks for stopping by!
If you have a question or comment, you can send an email to: lisaschroederbooks(at)gmail.com.