Welcome to the YA Scavenger Hunt!

I'm Lisa Schroeder, your host for this stop in the tour. I'm the author of over 15 books for kids and teens, including I HEART YOU, YOU HAUNT ME, CHASING BROOKLYN, IT'S RAINING CUPCAKES and my latest release, ALL WE HAVE IS NOW. This is my first time participating in the hunt and I'm thrilled to be here. So let's get to it!

This bi-annual event was first organized by author Colleen Houck as a way to give readers a chance to gain access to exclusive bonus material from their favorite authors...and a chance to win some awesome prizes! On this hunt, you not only get access to exclusive content from each author (mine is out there somewhere - can't wait for you to see it!), you also get a clue for the hunt. Add up the clues, and you can enter for our prize--one lucky winner will receive one signed book from each author on the hunt in my team! But play fast: this contest (and all the exclusive bonus material) will only be online for THREE DAYS.


Go to the YA Scavenger Hunt Page to find out all about the hunt. There are many contests going 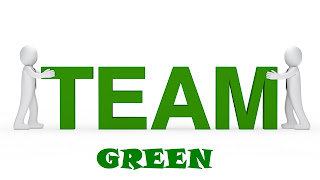 on simultaneously, and you can enter one or all! I am a part of the Green Team -- but there are SEVEN other teams which means eight chances TOTAL to win huge sets of signed books!

If you'd like to find out more about the hunt, see links to all the authors participating, and see the full list of prizes up for grabs, go to the YA Scavenger Hunt page.

Directions: Below, you'll notice that I've listed my favorite number. Collect the favorite numbers of all the authors on the Green Team, and then add them up (don't worry, you can use a calculator!).

Entry Form: Once you've added up all the numbers, make sure you fill out the form here to officially qualify for the grand prize. Only entries that have the correct number will qualify.

Rules: Open internationally, though anyone below the age of 18 should have a parent or guardian's permission to enter. To be eligible for the grand prize, you must submit the completed entry form by October 5, at noon Pacific Time. Entries sent without the correct number or without contact information will NOT be considered. I'm thrilled to be hosting Debra Dockter for the fall 2015 YA Scavenger Hunt.

When her parents told her she could be anything she wants, she took it to heart. She became a ballerina (performing "Swan Lake" 28 times), worked as a magician's assistant, became a child psychologist, and currently works as a college professor and YA author. She lives in Kansas with her family. You can visit her online at www.debradockter.com and twitter: @debdockterYA.

Debra is the author of DEADLY DESIGN which "School Library Journal" calls "an action-packed, page-turning thriller." You can purchase the book at many online retailers including Amazon. 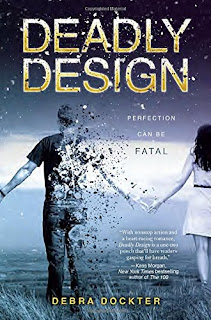 Genetically engineered identical twins Kyle and Connor McAdams were born two years apart. Their parents figured it was safer that way, to increase their odds of survival. Connor was born first, paving an impossibly perfect path for Kyle to follow. He was the best at everything—valedictorian, star quarterback etc. Kyle never thought he’d be able to live up, so he didn’t even try. But when Connor, 18, suddenly drops dead of a heart attack, and Kyle learns of other genetically modified kids who’ve also died on their eighteenth birthdays, he’s suddenly motivated—to save his own life. Like Connor and all the rest, Kyle was conceived at the Genesis Innovations Laboratory, where the mysterious Dr. Mueller conducted experiments on them. The clock’s ticking as Kyle searches for answers: who was Dr. Mueller really, and what did he do to cause their hearts to stop at eighteen? He must unravel the clues quickly, before, he too, becomes another perfect, blue-eyed corpse.

Debra is sharing one of her favorite scenes from the book, which requires a little backstory. As you can see from the description above, Kyle and Connor are genetically engineered twins. But the family doesn't realize that the boys have been genetically altered to be superior beings. Connor succeeds at everything he does, while Kyle, being two years younger, doesn't think he can compete with his brother's greatness, so he doesn't even try. Over the years, he starts to resent his brother's almost superstar status in their small town, so much so that he flips off anyone who accidentally calls him by his twin brother's name.

The following scene occurs after Connor dies on his 18th birthday, and Kyle is asked to read Connor's valedictorian speech during, what should have been, Connor's high school graduation. Hope you enjoy!

There is silence, real silence. There are hundreds of people surrounding me.Hundreds of people breathing and fidgeting and thinking. And staring. The principal has said something. She introduced me, and the gymnasium has filled with the silence of waiting.        I stand, then walk, taking a second to look at my parents. They’re sitting in the first row behind the graduating students, and while I know they want to give me encouraging smiles, smiles to settle my nerves, they can’t. I reach the podium, look down, and start reading. It’s typical stuff, at least what filters through the haze in my brain. Motivational, fortune-cookie shit. “Work hard and you can accomplish anything. Don’t let the difficulties of life dissuade you from your dreams, blah, blah, blah.” And then there’s a space between paragraphs and a handwritten note. It reads Find Kyle in the audience. Look at him. Don’t say another word until he sees you.        I glance back at the principal. She nods her head knowingly at me and smiles with trembling lips. I look up at the crowd of faces staring down at me. I’m searching through them, but for a second, I’m not sure if I’m looking for Connor or looking for me. I go back to the words.        “Kyle,” I read, “I don’t believe in regrets, at least most of the time I don’t. I don’t regret that we were born separately, because the truth is, if Mom had tried to carry us both at the same time, we might both be dead now.”        Everyone is quiet, breath-held kind of quiet. No one fidgets against the hard chairs; no one fans themselves with their programs or turns through the pages to see how much longer this will take. Even the quivering cries of a discontented infant stop. All anyone can hear are the electric fans moving back and forth to aid the school’s ancient air conditioning system.        “I guess I do regret a few things. I regret that I didn’t wait for you. I arrived on the path first, and I ran ahead, so far ahead that you couldn’t catch up. I shouldn’t have done that. To make it worse, being twins, I should have figured that people would always be comparing us. It was up to me to set the bar, and I set it too high – for both of us. There’s always been this thing inside me, pushing me to be perfect. And once it started, it was like running down a hill, and you can’t stop, because if you try, you’ll fall, and the hill is so steep you know you won’t survive.        “I’ll never forget when you were in first grade. We were walking home, and you wouldn’t talk to me because the teacher made you miss recess when you didn’t get a perfect score on your spelling test. She thought that because we have the same DNA, we’d have the same brain, the same likes and dislikes. But the truth is I had to learn those words. Maybe it’s that oldest child syndrome or something. I had to get them right, but you didn’t. You could have if you’d wanted to, but you didn’t, and that’s okay. Hell, that’s great, as long as you know you could have.        “I regret now that I studied for those stupid tests. I mean, really, who cares if a seven-year-old can spell umbrella or a ten-year-old can recite the fifty state capitals? It doesn’t say anything about who we are. Not really. If I had to do it over again, I wouldn’t have taken Calc 2 or Spanish 4. I don’t think I would have even gone out for track or football. Not because I don’t think education is important or because I don’t love sports, but because there’s no achievement in my life that means as much as being able to walk the path with you. You are my brother…and I love you.” I say these words slowly because they are for me. They are mine. “Nothing means more than that. And to all of you out there who have ever called Kyle ‘Connor,’ and especially to all of you who ever judged my brother for not learning his spelling words or his state capitals or his quadratic equations, this is for you.”        It doesn’t say anything else, but I know exactly what Connor intended to do. I look out at the young and old and middle-aged faces. I take a deep breath and, with tears burning in my eyes, extend my middle finger to the crowd.

Okay, now, don't forget to enter the contest for a chance to win a ton of signed books, including books by me, Debra Dockter, and many more. To enter, you need to know that my favorite number is 15. Add up all the numbers you find for the Green Team, and you'll have the secret code to enter to be eligible to win the prize!

To keep going, you need to check out Kay Honeyman's website, the next author on the hunt.

But WAIT, before you go, how about a little extra giveaway (for an entirely separate prize)? Because I LOVE giveaways. This one is open to US residents only, and you must be 13 or older to enter.

Just fill out the Rafflecopter below and voila, you're entered to win a lovely framed print with a quote from ALL WE HAVE IS NOW along with your choice of any one of my YA novels, signed and personalized! 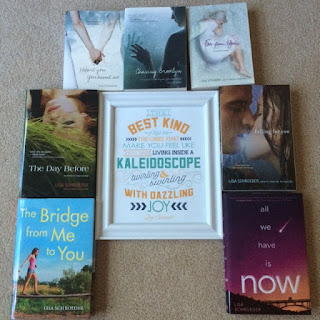 a Rafflecopter giveaway
Posted by Lisa Schroeder at 7:00 AM

Email ThisBlogThis!Share to TwitterShare to FacebookShare to Pinterest
Labels: contest, YA Scavenger Hunt