When I heard Taylor Swift was coming to Portland, I knew I wanted to take my 12 year old niece. She's a fan, as I am. I find Taylor's music so very honest, and the reason she is so popular is because she writes what it feels like to be a teen girl. 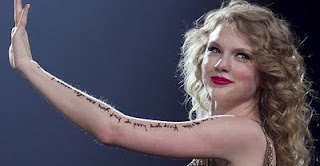 The set changed again and again. She changed (clothes, about 6 or 7 times, I lost count). Each song was like a short theatrical performance, with musicians and dancers and at times, fireworks and acrobats! It was amazing.

Yes, each song was a little story she played out on stage. And the fans ate it up. I couldn't help it, I teared up a few times as the voices of thousands of people joined in, singing her songs that we all know by heart. And what I loved was Taylor took all of it in too. All of the love in that room, for her and her music, she would stop and just take in the cheering, smiling and smiling, sometimes for an entire minute, just standing there. That's what really moved me, I think - all of the joy and love in that huge arena.

At one point, she walked through the crowd and sat against a lovely tree that was all lit up and slowly spun around. There, she played her guitar and sang to the other end of the arena. So magical. For her encore, she came out on a couch in a beautiful gown with her guitar and sang Fifteen, the song that speaks to every teenage girl about what it feels like to BE that age, when every little thing is such a BIG thing, and the first love feels like it's going to be it forever and ever.

The arena lit up with lights and you could hardly hear Taylor because the crowd was singing so loud.


Magical. That's really the only way to describe it. I truly feel honored to have been a part of it for one night!

Posted by Lisa Schroeder at 1:10 PM