Lately I find myself drawn to mysteries with suspense. There is something about wondering - what happened and WHO did it? And not just that, but wondering if a character you immediately like could have possibly done such a horrible crime.

Maybe it started with the Serial podcast last year. That could be it. Up until then, if you'd asked me if I was interested in murder mysteries, I would have said no. But it seems to me, as time goes on, it makes sense that we like to try new things in the way of stories. If we've stuck with the same kind of things for a long time, isn't it natural we'll start to maybe get a little bored?

Like, I've had somewhat of a hard time finding YAs that keep me interested lately. But I read this YA novel, WITH MALICE, by Eileen Cook recently and I really enjoyed it. It kept me wondering, turning the pages quickly, trying to piece together the puzzle. A girl's friend is dead, but she can't remember the last six weeks or what happened the night her friend died. 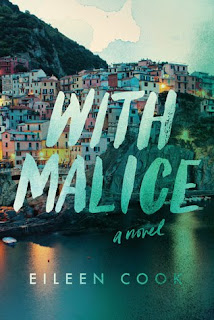 I also just watched the last episode of "The Night of" on HBO, an 8-show series about a young man who wakes up in the kitchen of a girl's apartment and goes upstairs to find she's been stabbed to death, only he doesn't remember anything past a certain point in the evening. All of the evidence points to him and yet, it doesn't add up. He's a nice guy. He didn't do it. Did he?

So interesting that both the book and the show I've enjoyed recently play around with mystery and memory. Of course, for me, it's also about the all important main character - finding ways to make me care and to keep me vested. It's a skill, that's for sure!

Posted by Lisa Schroeder at 2:35 PM