While I don't necessarily enjoy writing these "year in review" posts very much, I sure do appreciate having them to read later on. So here I go as we say good-bye to another year and hello to a new one! It's hard to say what I was working on in any given month. I don't really write that down in my calendar. I'm just always working on *something.*

January
A little recognition for my small-town, big-dreams book

I was notified that THE BRIDGE FROM ME TO YOU was an Oregon Book award finalist, which was wonderful news. Ultimately, it didn't win (April Henry's THE BODY IN THE WOODS took home the award) but it's always nice to be nominated. In January, I also finished a proposal for the book that would become SEALED WITH A SECRET, a companion novel to MY SECRET GUIDE TO PARIS (coming in May, 2016)

I worked hard on this novel for a lot of years, so it was fun to finally have it out in the world. I've gotten a lot of notes from people who have enjoyed it, which makes me happy! Besides the book release, my calendar shows a lot of substituting. And shuttling my son, who was a senior in high school last year, from school to home because he had early release and didn't drive. This year he's away at college -- we just took him back yesterday. I often hear parents complain about feeling like a taxi driver, but I never mind that part of parenting. Some of my best conversations with my kids happen in the car. 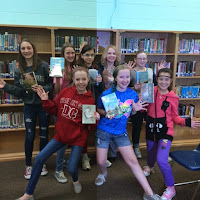 I love visiting with kids, both virtually and in-person. In March I participated in World Read Aloud Day and read aloud to a bunch of kids all across the country. I also visited some middle schools in Grants Pass and had so much fun talking doing that! One of my favorite things about doing school visits is that kids often get the opportunity to take home a signed book. I was so impressed with the girl who told me she saved her dog-walking money so she could buy four of my books and get them signed and personalized. 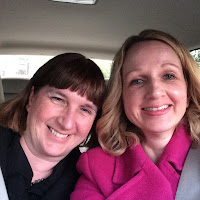 
The highlight of April was definitely meeting a friend I've known on the Internet for many years but had never met in person. When I heard Cynthia Lord (author of RULES and others) she was coming to my city for a school visit, I jumped at the chance to see her. We went out for dinner together and the next day I was lucky enough to be able to attend one of her presentations. She is so good at talking to kids, and I learned a lot from her. We forgot to take a photo at dinner, so we took a selfie in the car together. I love it!

May
The first Cavalcade of Authors West 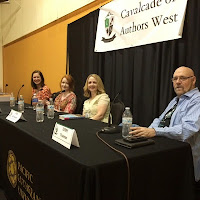 There's a great program in the tri-cities area of Washington that happens every year called the Cavalcade of Authors where authors come and teach middle school kids on many different writing topics. Last year, the Seattle area decided it was time they implemented something similar and I was fortunate enough to be invited for this inaugural year. Um, don't be too jealous but that is me on a panel with Marissa Meyer (THE LUNAR CHRONICLES),  Richelle Mead, (VAMPIRE ACADEMY) and Terry Trueman (STUCK IN NEUTRAL). It is so hard not to be a total fangirl at these events, let me tell you. May was also spent writing SEALED WITH A SECRET.

June
The month of freak out

Lots of times when I talk to kids they want to know what it's like to have a book published. To have a book with your name show up in bookshelves across the country. Of course in a lot of ways, it's thrilling. Wonderful. Humbling. But it also can be terrifying. Because the words you've slaved over, the words you've changed and changed and changed again, trying to get it *just* right, will now be read and dissected by people. I don't think I'd ever been as nervous about a book releasing as I was for ALL WE HAVE IS  NOW. I tried to keep my head down, I needed to finish the companion to MY SECRET GUIDE TO PARIS after all, but I also spent a fair amount of time worrying. Which is not a good way to spend my time, I know. But there you have it. I often tell kids who are wanting to be writers to try to stay focused on learning the craft and writing for fun and to practice because publishing is a TOUGH business. To say you have to have a thick skin for the criticism that will undoubtedly come your way when a book is published is an understatement. Maybe that's what I was doing in June - preparing my skin for what was to come. Because boy, did it come.

July
My seventh YA novel

When I did a librarian event in October, I had a librarian come up to me, so excited to tell that this is probably her favorite YA novel that she's read in the past ten years. It's one of the best compliments I've ever received about my writing. I could tell you the other things that have said about this book, but I'm not going to. I'm going to focus on the positive. Every day I try to remind myself I don't write for the people who dislike my books, I write for the books who DO like them. Not always easy to remember, but I try!


August
Time for some fun

I saw James Bay in concert. I took my husband to see Wicked for the first time (my third time, his first). I ate lots of peaches. Did a fun event at Seattle University Bookstore with some other authors. Soaked up the sun. (I miss you, sun!).

There was a lot of shopping in September. A lot of "making lists and checking them twice" to make sure he'd have everything he needed. He's only two hours away, but still, I wanted to get it right. It's hard to leave home and it made me feel better to know we'd done everything we could to make his new room as comfy and cozy as possible. 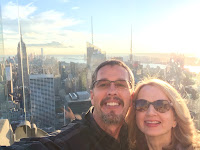 This was probably the highlight of the year! Oh, we had so much fun, my husband and me. It was great to lunch with my editors and to see the places where books are made and where dreams come true. I want to go back again soon. It had been four years since I'd been there (my first time), and it was too long. Next time I want to go with my husband in the late spring or early fall when it's much warmer. It was a little too cold at times for me.

After some disappointing news, I did some soul searching and decided to work on something new. It's secret. Super secret. I've only told a few people. I love it. I'm going to keep working on it because I want to finish it and because I think it's good, dang it. This business has been and always will be a roller coaster. The main thing is to keep writing through it all, and that's what I always try to do.

There were four sad days in December, when I logged in to Social Media and felt my heart break for myself and friends who had lost someone wonderful. I don't really have it in me to elaborate so I'll just leave you with this thought that I posted on my author FB page.

As I look ahead to the new year, I want to do a better job remembering that the best things in life are the little things and the best friends/family in life are the ones who are always happy to see you, and to treasure them every day.