I did this last year, and thought I'd do it again this year. It's nice to have a summary of the year to remember all the fun I had. 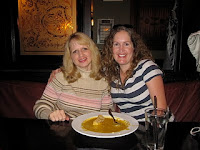 January
Baby it's cold in Utah
January marked my one year anniversary of quitting the day job. It felt so good to make it to that year mark. As for writing, I was revising a YA novel I'd written in the fall. I worked on it during a writing retreat my friend, Lindsey Leavitt, hosted in Utah. So much fun. That's me with rock star author, Becca Fitzpatrick.

February
One day, forever changed
I have written books about love and loss, healing and hope. But nothing can really prepare you for losing a dear friend. On February 23rd, I got the call that Lisa had passed away. A few hours later, I got the call that I had sold my first fantasy middle-grade novel to Holt. As it says in THE DAY BEFORE, "Life is the bad with all the good. The deadly sharks with the beautiful sea stars." 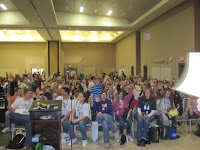 March
Tri-Cities, here I come and Hello, are you serious?
I attended the Cavalcade of Authors in Washington the first part of March and it was SO much fun! Look at all of those kids, excited about reading and writing. I did three back-to-back workshops on revising and then spent the afternoon signing and answering questions. Later in the month, I got the call that CHASING BROOKLYN was a RITA finalist. I'd finally get to go to NYC!!! 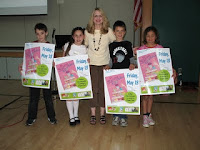 May
I love Oregon Trail Elementary!
The highlight of May was definitely the elementary school visit I did. The K-2nd graders went on an imagination safari with me and Little Chimp from LITTLE CHIMP'S BIG DAY while the 3rd-5th graders learned how baking up cupcakes is a lot like baking up stories. Thanks to my friend Jenn who helped make the school visit happen. I loved every minute of it.

June
THE DAY BEFORE and NYC!!
My fourth YA novel released in June and for the most part, was positively received by readers. The end of June, I headed to New York City for the RITA awards, where I had lunch with my agent, met my fabulous editors in person, had a cupcake party at the S&S offices, and signed books at Books of Wonder. June was an amazing month. More months like June, please!

July
Vegas, baby!
When you combine Lindsey Leavitt and Lifehouse, Lisa Schroeder will be unable to say no. Lindsey tweeted me one day - Lifehouse will be here in two weeks. Wanna come visit? Yes. Yes I do. And so off I went. And what a fun weekend we had, even if it was about 133 degrees outside. Crystal Perkins, the amazing bookseller at B&N even threw together a signing for me. Awesome.

August
Summer time, fun time
August was all about enjoying the nice weather that we'd been longing for here in Oregon and preparing for the release of SPRINKLES AND SECRETS. I made a bunch of videos dressed as a cupcake, which you can see on youtube if you'd like by searching for "Fun with Cupcakes Lisa Schroeder."

September
SPRINKLES AND SECRETS
Yay, after months and months of kids asking if there would be another book about Isabel and Sophie, I could finally say Yes there is and you can read the book now! I also started writing a new book - a YA novel with four different POVs. Oh boy.

October
Wordstock with special thanks to Sara Gundell
I love this picture like WHOA! Hung out with my pals Lindsey Leavitt, Suzanne Young, Sara Gundell, and Corey Whaley, who I hadn't met until Wordstock but fell madly in love with because he is the type of guy you just can't help but adore. The panel with Lindsey, Corey and myself was awesome and I want to do it again. Please, someone invite us - we're an entertaining trio and you will LOVE us! Thanks Sara, for making it happen!

November
Hit me Vegas, one more time
I couldn't resist. I went to Vegas again! My sweet friend, Suzanne Young, and I shared a room and participated in the Vegas Book Festival with a whole bunch of amazing authors. We also played the Wizard of Oz penny slots while drinking Coronas and had a magical night with Dorothy. I'm ready to go again. Suz??

December
First draft done!!
I finished the year with a new YA manuscript. Yay! I'm getting ready to send it off to a beta reader and after that, to my agent. The new year will bring revisions on contracted books (one of which I haven't even announced yet, but hopefully SOON), a new middle grade fantasy I want to write, and a couple of trips I'm really excited about. The best one? A trip to Rhode Island in March to participate as a JUDGE at an event called Cupcake Madness!

I have the best job in the world!! And I just realized I saw Lindsey four months out of twelve this year. Thank you, God. You obviously gave me what I really needed.

Here's to a happy, healthy, and prosperous new year for everyone!

xoxo
Lisa
Posted by Lisa Schroeder at 9:05 AM