I know, it's usually the Friday Five, but I'm a few days behind with *everything* lately. Like, so many people I know have already seen Catching Fire, but I won't get to see it until this weekend sometime. I'm SO excited - people are raving about it.

Anyway, I have a few things to share, so here we go, the Monday Five, which doesn't sound nearly as cool as the Friday Five, but that's okay since I've never been, and never will be, one of the cool kids.

1. This weekend I switched out my iMac that was about ten years old, so I'm writing this on my new and improved computer and I LOVE IT! I bought a used iMac on ebay from a company that specializes in cleaning up old ones and reselling them. This one (a 2009 model) came with a ton of software loaded on it and the latest operating system for much, much less than I would have paid new. I try to buy used as much as possible in life, because it just makes sense to me in so many ways.

As I was copying files over and getting everything set up on the new one, I noticed I've been using Office 2004. 2004, people! That is crazy!! The most frustrating thing was that Blogger wasn't playing nice with the old, old operating system I was using, so I couldn't read blogs anymore. I'm a strange beast of a writer. I have a laptop I use on the treadmill desk sometimes, but other times, I want a nice big screen and a comfy chair, so I really need both a desk computer and a laptop. I've dragged my feet for so long, but I'm glad I finally took the plunge and got something newer. The speed - OMG, the speed!!! Happy, happy, happy.

2. On Friday, I got news that School Library Journal will review Frosting and Friendship in its upcoming December/January issue, and it's an awesome review! Here's a snippet:

"Schroeder’s realistic dialogue and depiction of daily dramas show her strong grasp of middle-school life. The combination of baking and bands will initially attract many girls, but it’s the short chapters and simple diction that keep the plot cooking. Readers will be drawn to the well-delineated, quirky Lily. They’ll empathize with her, ponder her dilemmas, and cheer her on to make the right decisions."

3. I saw my baby nephew, Jacob, this weekend. He is almost three months old. He had a bit of a rough start but he's doing great now! Baby cuddles are the best! 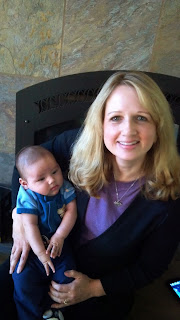 4. The fourth and final CHARMED LIFE book is due one week from today. I have about three more chapters to write. I'm hoping to finish the draft by Wednesday, and then I will spend a good chunk of the long weekend editing before I send it off to my editor on December 2nd. Eep - I'm almost there! Fingers crossed things go according to plan!

5. Finally, I discovered over the weekend, thanks to Kim Baccellia who told me the news via twitter, that FALLING FOR YOU is a paperback pick in the December 16th issue of FIRST for Women magazine. Of course I had to go out and get a copy. And, I had to take pictures because, come on, Dr. Oz on the cover and Nicholas Sparks, Maria Semple, and Shirlee McCoy featured alongside my book? So. Weird. 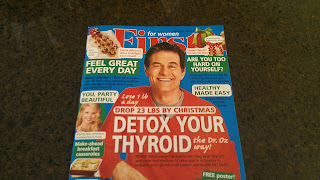 "When my book club chose this novel about a young relationship gone wrong, I was skeptical," says Melissa Sorrells, FIRST associate editor. "But its complexity drew me in and held held on tight." It goes on to say, "Rae's courage and journey to self-worth reminded me of roads I've traveled in my life -- and of just how strong I am."

The paperback comes out on December 3rd!! Next Sunday I'll have a list of ten things you should know about the book to celebrate the paperback release.

In the meantime, have a *wonderful* Thanksgiving holiday! Eat lots of pie, okay? I mean it. I really want a t-shirt that says, "Life is short. Eat pie."
Posted by Lisa Schroeder at 7:54 AM

Email ThisBlogThis!Share to TwitterShare to FacebookShare to Pinterest
Labels: Falling For You, friday five, Frosting and Friendship, reviews