Happy to announce a new book!

Here's the announcement from Publisher's Marketplace.

I've been working on this book for a long time, revising and revising some more, trying to get it right. I'm doing another revision now, for my editor, due mid-March. I'm really excited about this one though and can't wait for readers to meet Nora and travel along with her to Paris!

I need to give my friend and author extraordinaire, Daisy Whitney, a shout-out here. She read an early version and her encouragement and helpful insight really kept me going!

Have a great weekend!!
Posted by Lisa Schroeder at 7:44 AM 13 comments:

Thinking about what sells a book

Facebook may have been around, I'm not sure, but most people I knew weren't on it yet.

MySpace was going strong, and I did have a page there and tried to connect with people. I know Lisa McMann was incredibly successful in connecting with teens there and getting them excited about her WAKE trilogy when it came out.

Book blogging was really starting to be a thing. I did connect with some book bloggers, but I'm 99% sure my first YA novel didn't have an official "tour" or anything.

Blogging was popular at the time. I had a blog over at livejournal (which still exists because so many comments from my friend Lisa, who passed away three years ago, are there, and I love them. I can't delete them. I just can't. It's like a part of her still exists there. Though I should probably delete it because holy crap, talk about over-sharing.) ANYWAY, a bunch of us who were writers followed each other and had a lot of fun within our tight-knit community. Most of us started our blogs before we were published. So our posts were about personal things or about our writing struggles or about the bumpy road to publication. I loved it. There was no promotion. Just bad news or good news and all the stuff in between. Until things changed. Until everyone started getting book deals.

Here are some things I remember regarding the YA market leading up to my first YA novel coming out.

* I clearly remember the buzz around TWILIGHT before and after it hit the shelves in 2005.

* I remember reading LOOKING FOR ALASKA while on vacation at Sunriver in 2005. I loved it and I was so excited when it won the Printz in January, 2006. It didn't have a lot of buzz. I only knew about it because his editor was Julie Strauss-Gabel, and she was an editor I admired and kind of kept my eye on.

* I remember it was around the release of the second book of TWILIGHT that bookstores started making a space just for YA novels and moved them out of the children's section. Wow.

* I remember not having a clue as to what to do to promote my book (this is still mostly true, by the way). I joined the class of 2K8. I got a web site going. I kept blogging. And that was about it.

When I HEART YOU, YOU HAUNT ME came out, I remember checking Amazon at one point and I was *shocked* the Amazon ranking was below 10,000. I could not believe it. Even though we don't really know what the numbers actually mean in terms of how many copies sold, I think most people know what's good, great, fantastic, bestseller territory, etc. Anything below 10,000 is good, especially for a debut author.

I'm not sure any of my other books, except for maybe one of my middle-grade novels, dropped down that low.

My editor came back from vacation toward the end of January, and when we talked on the phone, he said, "All I've heard since I've been back is how well I HEART YOU is selling."

I did very little promotion of the book. I didn't have any big name blurb. It got a couple of okay reviews, but nothing spectacular. But here are a couple of things that I believe helped it to sell:

1) The title and the concept combined with the amazing cover. You never know for sure what's going
to work and it all just worked.

2) It was the kind of book people read and talked about. What is that kind of book, exactly? No one really knows. If we did, we'd all be writing it. I've said it before and I'll say it again - word of mouth is the BEST kind of marketing there is. If you love an author, talking about his/her books is the number one thing you can do to support that author. And for all of the people who have talked about my books over the years - thank you!!

Okay, one more thing helped it to sell.
3) Luck. Right place, right time, simple as that. I think sometimes we underestimate this element.

I've been thinking about all of this in regards to twitter and how it really varies as to how much authors tweet about their books. Some tweet very little. Others tweet all the time.

But can there be too much, is the question I've been pondering? I tend to think yes.

Personally, I think the 80/20 rule is a good one to follow. That is - only about 20% of tweets or posts on facebook or instagram or wherever should be book/promotion-related. More than that, and you run the risk of being annoying. You also may look desperate. Those two things do not sell books.

The biggest change from the year 2008 to the year 2014 is not where people talk about books or how we connect with each other or any of that. No, the biggest change is how many more YA novels simply exist now. A LOT!!! It is much harder to get noticed in today's market. Of course, we also have a gazillion more books to choose from to read, which is pretty sweet, right?
Posted by Lisa Schroeder at 8:40 AM 7 comments:

Thursday through Monday, I was housebound due to a big snow storm that is rare for our neck of the woods. It was very pretty. And quiet. I'm always amazed how much quieter everything is during and after a lot of snow falling.

It's like a the world is snuggled under a giant quilt, sleeping. 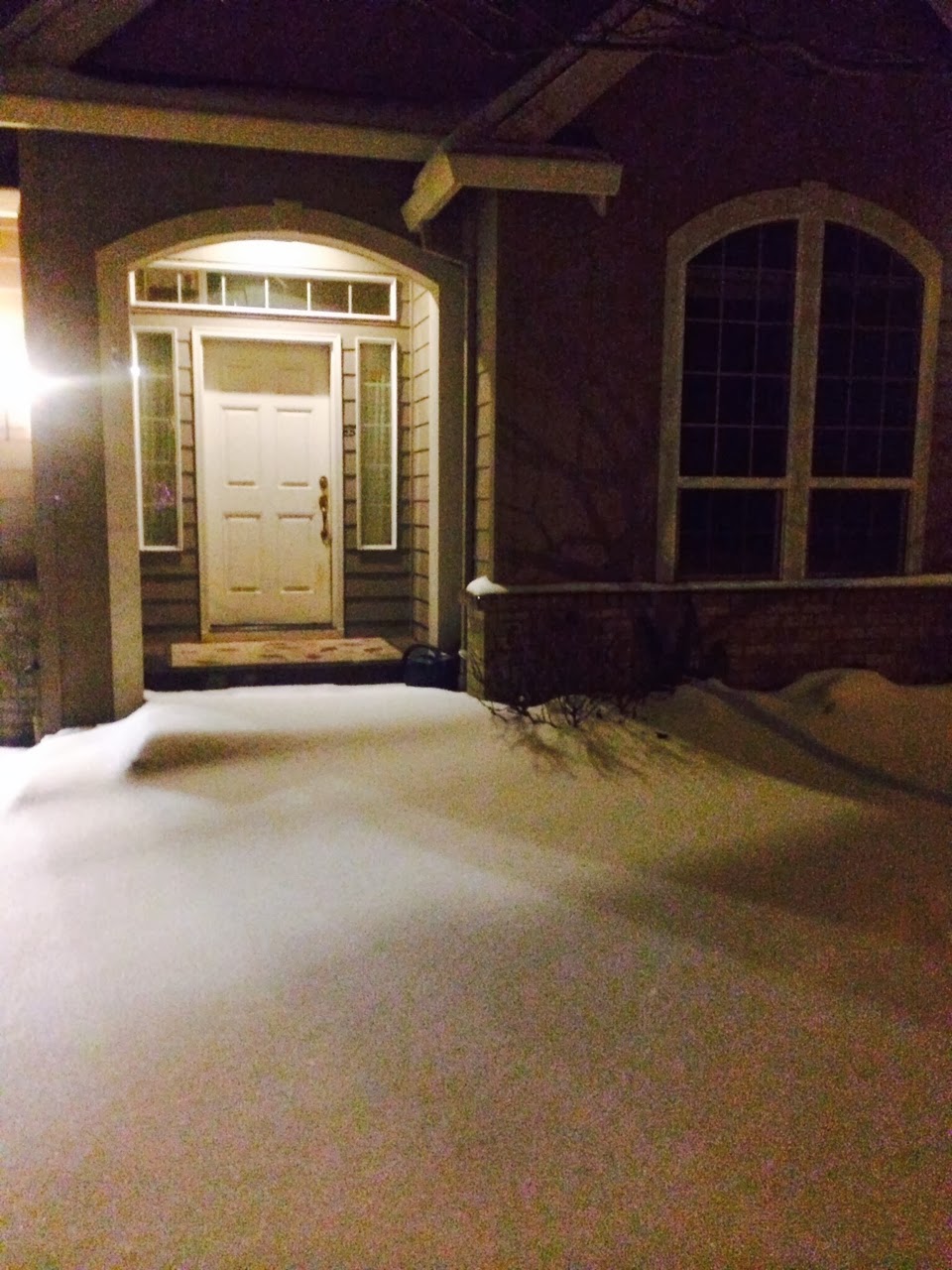 The kids loved having a couple of snow days. But I am glad the temperature is back to normal (way above normal, actually, as we're sitting at 50!! degrees today) and I can take the dog for a walk and not worry about falling and breaking my neck.

I know the south and the east are about to get slammed with another big storm, and I am so, so sorry! Winter sucks. That's all there is to it. Hang in there.

The good news is that since I was stuck at home, and my husband had to work, I wrote a LOT. In fact, I finished a draft of a new book. It's always such an exciting thing - to get to the end of something I started a few months ago, not knowing for sure if I'd get to the end or not. Never gets old, let me tell you. I'm working on revisions now so I can send it to my agent soon and see what she thinks. I don't want to say a lot, but I will say this. It's kind of a strange book, but I am *really* excited about it, because strange isn't always a bad thing. There's a fine line, I know, but when done right, the unique and the odd can create a great read. Here's hoping...

Along with getting this new thing ready for my agent to read, I have first pass pages to go through on one of the CHARMED LIFE books. And I have edits coming soon on another book I sold recently but haven't announced yet. When all of that's done, I plan on taking a couple of months off from writing.

I'll still be working, since I have Skype visits and other appearances coming up, but it's time to fill the well on the writing end of things. I'm sure it won't be long before I'll be itching to get back to it. But for now, I'm looking forward to some time off to do other things.

Read!
Go to my son's track meets!
Spring clean! (Okay, looking forward to that is reaching, but still. Needs to be done.)

Hope all is well in your neck of the woods. Only 35 days until spring! See?


Spring Countdown
Posted by Lisa Schroeder at 10:07 AM 1 comment:

Email ThisBlogThis!Share to TwitterShare to FacebookShare to Pinterest
Labels: first drafts, life
Newer Posts Older Posts Home
Subscribe to: Posts (Atom)
This is the official website of author Lisa Schroeder. You will find information on me, my books, school visits, upcoming appearances, and much more. If you are a teacher or librarian interested in scheduling a Skype visit with me, there is more information HERE. Thanks for stopping by!