I'm not sure how to describe it, exactly.

It's like you're trying to enjoy the quiet, taking advantage of the time and writing a lot (hopefully) and enjoying the (mostly) stress-free time. But every once in a while your brain kind of wakes up and says - hey, remember those books coming out soon? The ones you worked hard on last year? The ones some of your readers are saying they're excited to read? The ones that will be reviewed by professional reviewers soon? Remember those? What do you think is going to happen? Huh? What do you think is going to HAPPEN? Will things go well or will things go...not so well?

Only time will tell, of course. There's nothing that can be done now. The books are finished. You've done all you can do. And you just kind of want to forget about them for as long as you can, except that silly brain loves to send reminders every once in a while.


I have a busy spring. Lots of Skype visits, a few appearances, and one trip (to Texas in April, for the Texas Library Association conference). So I'm going to do my best to enjoy this time. I'll write. I'll talk to kids. I'll talk to librarians. I'll try to be excited, even though I am often more terrified of failing than anything else.

See, every author wants his/her books to do well. To sell well. To find readers and to make those readers happy, which in turn makes the publisher happy. But the truth is, it doesn't always happen. I try to keep my expectations low. I try to tell myself that I've done my job, the rest is out of my hands, and what will be, will be. It simply doesn't do any good to worry about it. Easier said than done, of course.

I've done this book thing many times now. It seems like it should get easier, but that doesn't seem to be the case. At least in my experiences.

Yes, right now is the time before. No one knows what's going to happen. I like the time before (as long as my brain doesn't annoy me too often). You know why? Maybe because anything is still possible. Or maybe because, I haven't failed yet.

And therein lies what is SO hard for most authors - to believe that a book which is published and will be read by some (whether a few or a million) is a success no matter what. Because what an amazing thing - a book now exists where there wasn't one before. Something was created from nothing. My silly, annoying brain managed to write a novel. That is no small thing.

Let's try to remember that, brain, in the weeks and months ahead. What do you say??

Email ThisBlogThis!Share to TwitterShare to FacebookShare to Pinterest
Labels: a writer's life, pre-publication

Sometimes when you're in the middle of the draft, the hardest part is just opening the document and diving in. There is so much fear when you're drafting. I've learned over the years it's part of the process, and you just have to push through it or past it or whatever.


In case you can't read my handwriting:

There is always
fear.

You have to push the fear away
with all your might.

Open the document
and tell yourself
I can do this.

Because you CAN!
Because you are BRAVE!
Posted by Lisa Schroeder at 4:39 PM 2 comments:

World Read Aloud day is March 5, 2014 and Kate Messner has put together a list of authors who are willing to Skype for free that day, in twenty-minute increments, and I am one of those authors!!

I have two visits scheduled so far, and have room for probably four or five more, so if you are a teacher or librarian and are interested in having me Skype with your school that day to celebrate World Read Aloud Day, please get in touch via e-mail at lisaschroederbooks(at)gmail(dot)com.

What do you need to Skype, you ask? A computer, the Skype software, which you can download for free, and usually a projector, so everyone in the room can see the author on the big screen!

It's easy and it's fun, I promise. I've literally Skyped with probably a hundred schools by now, and have participated in at least two WRADs, maybe three. I had to skip last year because of my writing schedule, so I'm happy to be participating again this year.

Here's basically how the visit will go - I talk for a few minutes and introduce myself, making sure to encourage kids to read for fun because as a writer, I believe there is nothing that will help your writing more than READING. I choose one of my books that is age-appropriate for the group I'm speaking with and read aloud for a few minutes, and then I open it up to questions. 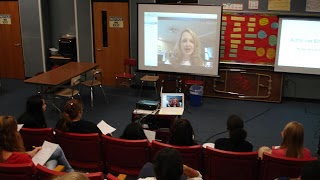 If World Read Aloud Day doesn't work for your schedule, but you are interested in learning more about Skyping with me, please see my page over at the Skype an Author Network.

Have a great week!
Posted by Lisa Schroeder at 9:49 AM No comments:


In case my handwriting is too hard to read:

The thing is
it all comes down
to this:

Do the best you can.
Every day.

And it will be good enough.
Not perfect.
Never perfect.

Your best is enough.
Posted by Lisa Schroeder at 9:00 AM No comments: 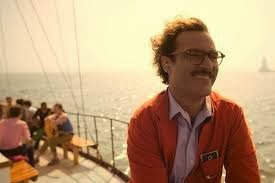 I'd bet you have never seen anything quite like "Her." And what a rare treat that is when it happens, yes?
Posted by Lisa Schroeder at 2:10 PM 2 comments:

Winter break was wonderful for me because I didn't do all of the running around I usually do when the boys are in school. This week, it's back to the routine of running my teen boys back and forth between home and high school and the Max station to get down town for college classes and other various things. Neither of them drive yet, and while there are many advantages to this, it breaks up my day in the worst way. I rarely have a big chunk of time to just... write.

I sometimes get frustrated by this, but the truth of the matter is, a big chunk of time is NOT a necessity. I wrote five or six novels (a couple of which were never published) in little increments of time while I worked a full-time job.

And so, today's entry:


Typed out, in case that's your preference.

It is enough.
So open the document
and see what happens.
You'll never know until you do it.
Posted by Lisa Schroeder at 2:33 PM 1 comment:

I had the date wrong on the last one. Oh well, that's what happens when you are on winter break, haha!

In case you prefer reading type to handwriting, here is today's entry:

"What will people think"

Posted by Lisa Schroeder at 7:00 AM 2 comments:

Diary of a writer

I am going to do a new thing this year called "Diary of a writer" where I write down thoughts in a journal before I start my daily writing. I won't post entries every day, just when I have something interesting to share.

And it's okay - writers feel those things quite frequently. It's what we do with those feelings that's important, and writing them out is actually helpful, I've found.

Here's my first one:

I will also be posting them on my tumblr blog, just FYI.

Posted by Lisa Schroeder at 8:40 AM 3 comments:

Email ThisBlogThis!Share to TwitterShare to FacebookShare to Pinterest
Labels: diary of a writer
Newer Posts Older Posts Home
Subscribe to: Posts (Atom)
This is the official website of author Lisa Schroeder. You will find information on me, my books, school visits, upcoming appearances, and much more. If you are a teacher or librarian interested in scheduling a Skype visit with me, there is more information HERE. Thanks for stopping by!
If you have a question or comment, you can send an email to: lisaschroederbooks(at)gmail.com.