We cleaned all of the window tracks, which were in desperate need of cleaning. Yuck.

I cleaned the fridge, and my husband has since told me about ten times how nice it looks. Um, it wasn't that bad, was it?

We bought a new stove and the new one is so pretty and shiny... and clean! I know, that doesn't really count, but I'm still including it. Because it's so shiny! So clean!! How come they can't stay that way?

Then, there was the toy room. Oh, the toy room. My boys are 13 (almost 14, ack!) and 16. They hardly went in the toy room anymore, except to get clothes, because their dressers were in there. I knew it was time to sort, give away, and put away. But I was in no hurry, because, ugh, what a big job. Then one night a few weeks ago my 16 YO said, I think I want my own room. Until now, they've shared a room because they wanted to. Poor G. I think his feelings were hurt a tiny bit. Like - you want to move away from me??? Of course it wasn't personal, but I know it felt that way. He's a pretty easy going kid, though, and seems to be doing okay since the big move. 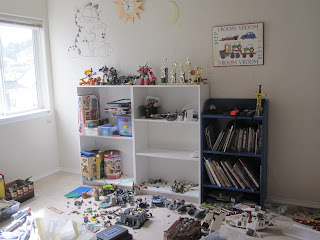 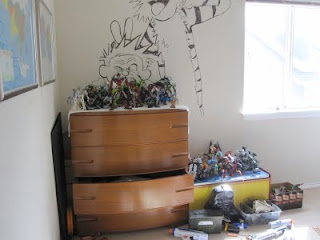 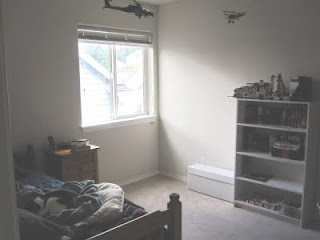 Yes, it's very plain. That's how he wants it, I guess.

Now I have a nasty cold. I will have to tackle the cupboards and closets another week. Darn.
Posted by Lisa Schroeder at 9:33 AM