It's time to begin a new book.

And as I was thinking about this last night, I thought back to this past year.

In January, I quit my job. In that first month of my new career as full-time writer, I had a couple of different proposals rejected by my editor at the time, plus I received the last of the rejections on an entire YA novel I had spent a year writing. It was a dark time. 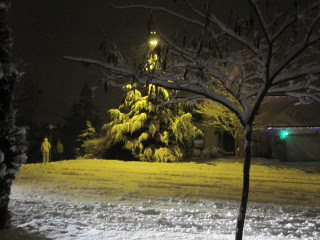 In February and March, I wrote THE DAY BEFORE. I didn't show anyone pages. I didn't talk about it with anyone. I just wrote it. I followed my heart, and I wrote. Risky? Yes. Necessary? Yes. I had to go back to the basics. I had to go back to why I do this work in the first place. I had to write for me, myself and I and get lost in a story. We went to the beach the end of March, and I made hearts in the sand, like my main characters. I felt good about the book. The darkness had disappeared. 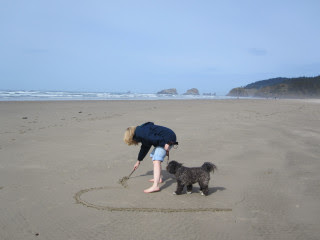 The book went on to sell to Pulse, and I breathed a huge sigh of relief.

When I finished that up, I decided to try and tackle a major revision. Many of the rejections I had received on the YA I'd written the previous year said the subject matter seemed more middle grade to them. So I thought - I can write it as a MG. It will be a complete and total rewrite, but I can do it.

Well, 9 chapters into it, I was miserable. I didn't know what I was doing, where I was going, why I was writing about these characters and why I should care. I was sitting at my desk one day, feeling very uninspired, when I opened my idea journal. I turned to a page I had written six months prior. There wasn't a lot on the page. But as I sat there, I thought, I want to write THIS book. And the "what ifs" started dancing around in my brain. I opened up a new document, started writing, and as I heard Laini Taylor say once, it was like I'd been released from jail.

I finished it fairly quickly (it's only 24,000 words or so), even though it's unlike anything I've ever written. There was something almost magical about the writing of this particular book. I feel like it was a gift, in a way. I can't describe it, but the result, a middle-grade novel called IMPOSSIBLY SMALL, is one I'm very, very proud of. And it's now going out into the world to see if it can find a home!!

In the meantime, there was other MG stuff happening. I wrote chapters and a proposal for a sequel to IT'S RAINING CUPCAKES. But my publisher didn't want a sequel. How about a companion, they suggested? So I had to come up with a plot and chapters for that, and then I decided to write the whole thing to make sure we were on the same page.

It sold. I just finished revisions. Waiting on a title, and then I'll share more about this particular book.

So yes, that's three books written this year. Plus proposals and rewrites that never became anything. In summary - a lot of writing. What am I, crazy? Maybe a little bit, but mostly, I'm a full-time writer and when I can spend 5-6 hours a day writing (some days more), that's what happens. Pages get written!

And so why am I going to start in on a fourth?

Because it's what I do. Because I have an idea that scares me and excites me and I want to see where it takes me. Every time, every SINGLE time, I'm about to start in on a new book, it's like I'm standing on the edge of a cliff, about to jump off. Will I land on my feet? Will I fall and break every bone in my body? Will a bird swoop down and catch me and take me for a ride I never imagined? Will a net appear, as it has, again and again and again?

I never know until I jump. And I'm feeling like I'm ready to jump again. Here I go... Posted by Lisa Schroeder at 8:18 AM

Email ThisBlogThis!Share to TwitterShare to FacebookShare to Pinterest
Labels: a writer's life, writing