The Bridge from Me to You - Question 1: Why Football?

Over the next two weeks, before the official release date of July 29th, I'm going to answer some questions about my upcoming young adult novel, THE BRIDGE FROM ME TO YOU. Questions people might have as they consider whether they want to read the book, or maybe while they're reading it, or even when they're finished with it.

The answers to these questions will mostly be just little peeks inside of my brain that may or may not be interesting to you. If not, it's okay. My brain is a little odd sometimes, I get it.

Okay, so the first question is - why football?

Colby, one of the main characters of the book, plays on his high school team, so football plays a part in this book. I know not everyone loves football. I like football when I'm watching a team that I'm invested in, for whatever reason, and somehow have a personal connection to one or more of the players. It's the reason I like the Green Bay Packers, for example. Aaron Rodger's mother took care of my son when he was two years old in her home daycare. I can still remember watching Aaron and his two brothers throw the football around in front of their house in the street. If only I'd had fortune telling abilities, I could have gotten his autograph at the ripe age of 12 and been rich in fifteen years!!

It's also the reason I enjoyed watching football in high school. We had a good team, a great team actually, and I knew some of those boys on the field. Some of them I didn't know, but I saw them in school, obviously, and I might have crushed on one or two of them. Maybe. Okay, actually, I'm not telling.

Our team made it all the way to the state playoffs two years in a row. My sophomore year, a bunch of us caravanned around the state and watched every playoff game. We slept in cheap hotels and even a church one time when the game was on the other side of the state. The year I went to the championship game, it was a nail biter, but in the end, we lost. Still, so many wonderful memories from that season. This is me (the one with the blonde hair) cheering for our Warriors at the championship game. If you can't tell, we really wanted our team to win. More than we wanted our hair to look good, obviously. 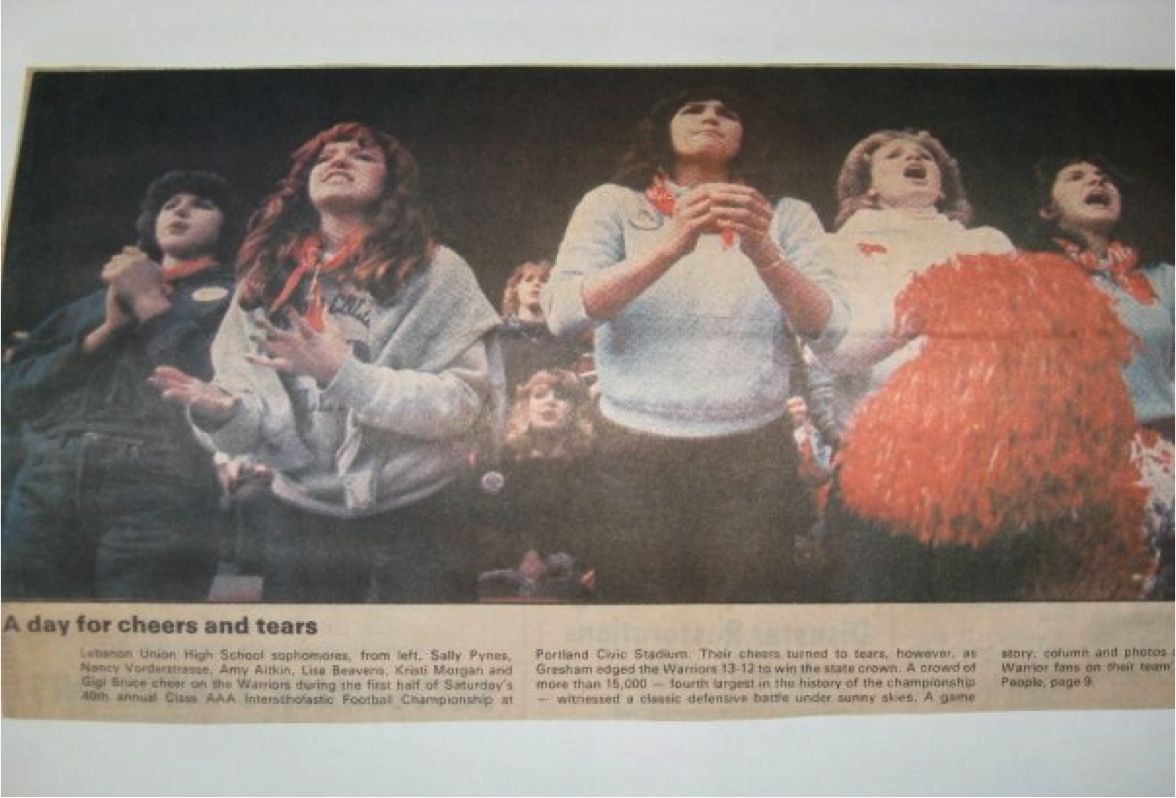 So why football? This book is about small town life, and I think in a lot of small towns, like the one I come from, the high school games are something a lot of people look forward to on Friday nights. It's a social gathering for the entire community. The games bring people together and for a couple of hours, everyone can forget their problems and focus on the players on the field.

The TV show Friday Night Lights will always be one of my favorite shows, ever. I miss that show. I miss Eric and Tami Taylor, Julie and Matt, Landry, Riggins, Smash, Vince, Lyla and Tyra, and the rest of the gang. Even though football was a part of the show, again and again you'd hear from people who watched, "But it's not about football."

So there you go. Next time I'll answer the question - Why Small Town Life?

(in case you missed it - there's a pre-order contest going on over at the Novel Novice blog. Check it out HERE!)

Posted by Lisa Schroeder at 7:21 AM

Email ThisBlogThis!Share to TwitterShare to FacebookShare to Pinterest
Labels: book release, The Bridge from Me to You