I've been thinking about this a lot lately.

The Parenthood finale was last week (I'll try to avoid spoilers) and there was a scene about halfway through the season that was perhaps meant to provide some subtle foreshadowing, when to me it seemed SO obvious that it was setting up the ending of the show. And I hated the idea. And when the time came, and the show ended exactly as I thought it would, I still didn't like it. That's not to say that the scene itself wasn't done well, because it was.

I just didn't want it to end the way Jason Katims, Executive Producer, wanted it to end. 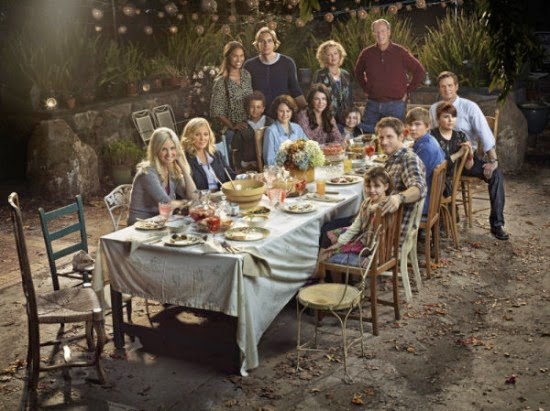 I searched the hashtag on twitter, however and a lot of people loved how they wrapped up the show.

In an interview about the final episode, Katims said the more personal something is, the more people can relate to it. And so you, you have to tell those stories, even if they're painful.

And I wonder, what personal issues did I bring to the story that made me feel the way I did about the way they chose to end it? I'm sure there are many.

But the other thing I've been thinking about is that Katims most likely took his hardcore audience into account. How could he not? This was, more often than not, a show that made people cry. Everyone expected to shed some tears during the finale. He didn't want to disappoint them.

I struggled and struggled with the ending of my upcoming YA novel, ALL WE HAVE IS NOW. I still have small anxiety attacks about it from time to time, if I'm honest.

But as I was thinking about this show, and the audience, and Katims taking on the painful stories and knowing the audience would probably expect one more during the finale, I also thought of MY audience. And when I do that, when I think of who I write for, I realize I made the right choice.

Will some people hate it? Yes. I'm sure of it. Oh well. Can't please everyone, say artists/writers/musicians everywhere, every day, as they put their work out into the world.

A story is one long stream of choices. If we're lucky, our characters will lead us along the path and make the choices interesting and fun and easy. But sometimes, that doesn't happen. All we can do is keep our mind open to many possible choices, and then, when it's time, we have to just do it - we have to go with our gut and we have to choose.

Scary? Kind of. Maybe it'll work for some people. Maybe it won't. But whatever happens, the choice is made. So now I work on a new story, so I have new choices to worry about, instead of focusing on the one that's already been made.

In life and in writing, I think the best thing to do is to just keep moving forward.
Posted by Lisa Schroeder at 12:34 PM