As I sit down to write this, I'm like, will I have much of anything to fill up this year's review? I honestly don't know. That's why it's good that I do these - my memory ain't what it used to be, that's for sure. If I hadn't done this the past 4-5 years, I might not remember that it was in 2012 I got to be a cupcake judge. OMG, so much fun. In 2013, I went to Arizona, Vegas, Manzanita, and San Diego and I wrote FOUR books. So let's see how 2014 stacked up. 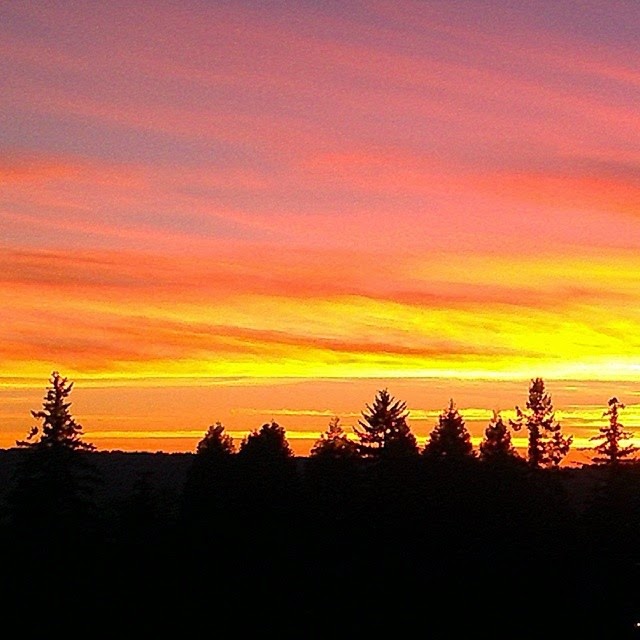 I took a lot of photos of sunsets last winter. I have no idea why, but I love them! And I hope this winter provides as many opportunities for some colorful scenery as last winter. January and February are my least favorite months, mostly because of the gray and darkness. My calendar says I did a lot of Skype visits during those three months too. Other than that, I was working on a YA manuscript that eventually sold and will be out in 2015! 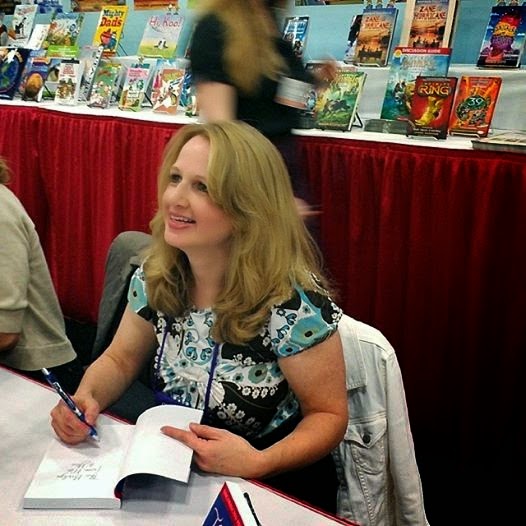 I love the Texas Librarian Association conference so much. One year I met and chatted with Suzanne Collins on the way home, at the airport. It's fun telling kids I've met Suzanne Collins - gives me Cred, yo.

I did a presentation on Skyping and signed Advanced Review Copies of THE BRIDGE FROM ME TO YOU, which went really well. It's always a little anxiety-producing when you're signing books at a conference. Unless you're John Green or Veronica Roth or Cassandra Claire. For mid-list authors, it's anxiety-producing, because you never know if people will show up. But Jennifer Ziegler and I were paired up and we ran out of books, so yay!

CAITLIN'S LUCKY CHARM and MIA'S GOLDEN BIRD were both released in May. After working so hard on this series for most of 2013, it was fun to finally have the first two books out for people to read.

In May I also led a Young Writer's Workshop at Powell's, which is always a good time. I was at Powell's a lot in May, actually. I went to three author events during the month, one of them for my Scholastic editor, which was fun, because we finally got to meet in person! 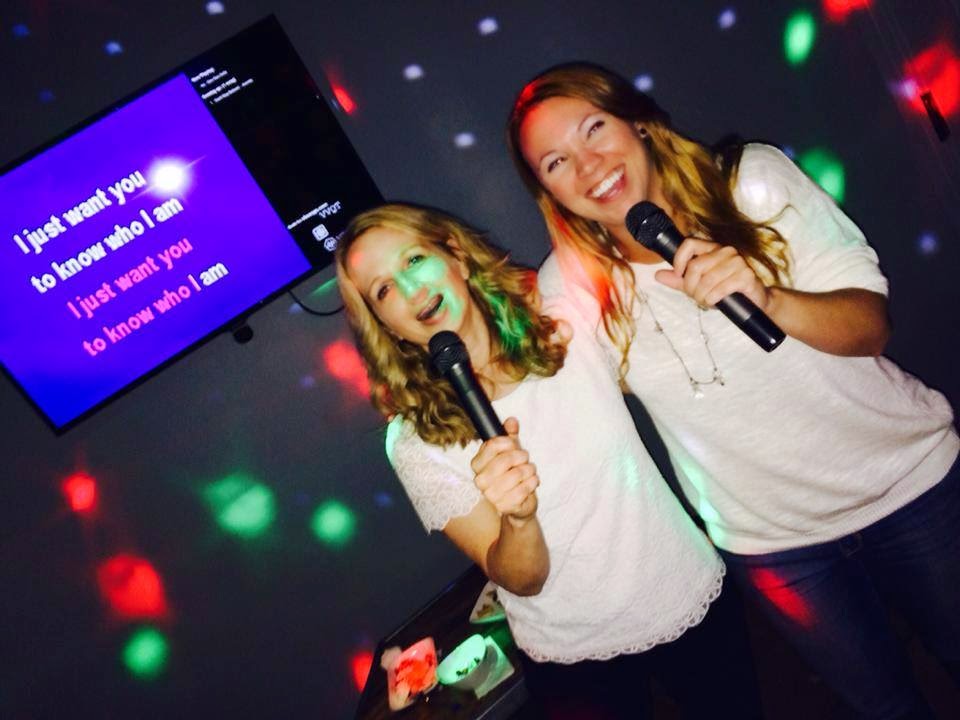 For the month of June, my timeline on Facebook is filled with happy-making things and sweet pictures - the rose garden, strawberries, kids getting out of school, etc. Makes me happy just looking and remembering. I am a summer girl, for sure. My friend Suzanne came to Oregon for a signing, and it was fun to hang out a little bit.

During May and June, I was working on a new manuscript. Just recently, I've gone back to that manuscript to try and make it better/stronger (the bionic manuscript?). Fingers crossed it will sell! 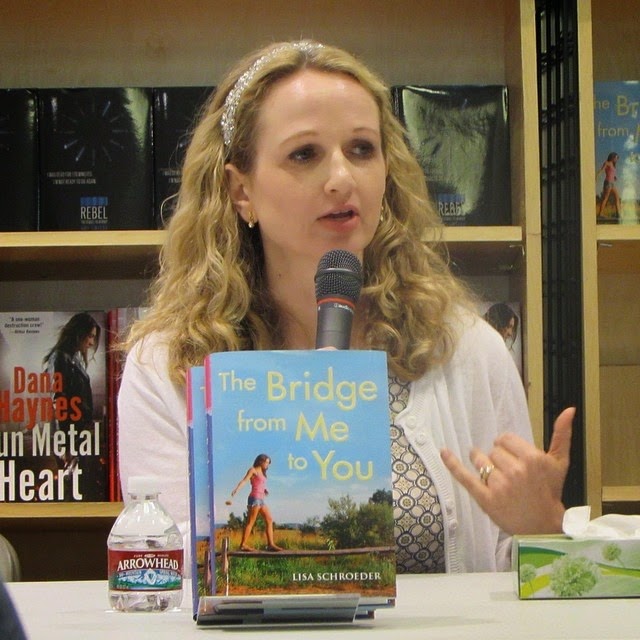 The third CHARMED LIFE book came out along with my sixth YA novel, THE BRIDGE FROM ME TO YOU. Here I am at a signing with a bunch of other YA authors (I think the signing happened in August, actually, a little bit after the book was officially released).

Along with all of the new books out in the world excitement, my family went to Sunriver over fourth of July and Crater Lake after that and we had SO much fun. I want to go again this year but not sure it's in the cards. Er, checking account. Boo.

On my calendar for the month are appointments and the premiere of Outlander. Haha. Well, I loved the book and in case you are new here, I love TV. Obviously. Story is story, so I feel no shame. Oh, and someone challenged me to do the ice bucket challenge, but I chose to send donations out instead. Because I'm a wimp. Brrrr... But the BEST thing about August was the office makeover that I started. It was ugly at first, but starting is often the hardest part.

I attended the Pacific NW Bookseller's Conference up in Washington, which was awesome. More work on the office. And another project - going through a box of letters from my grandma's college days and beyond. Such a treasure trove of stuff. And something there inspired me to start a new YA novel, which I did in November. 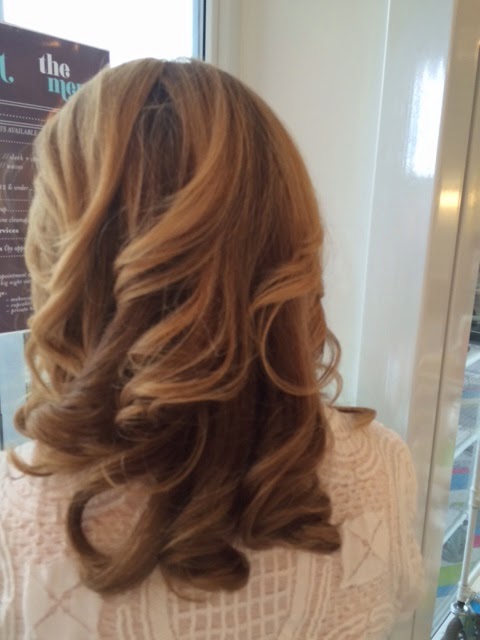 October
Vegas and a Video 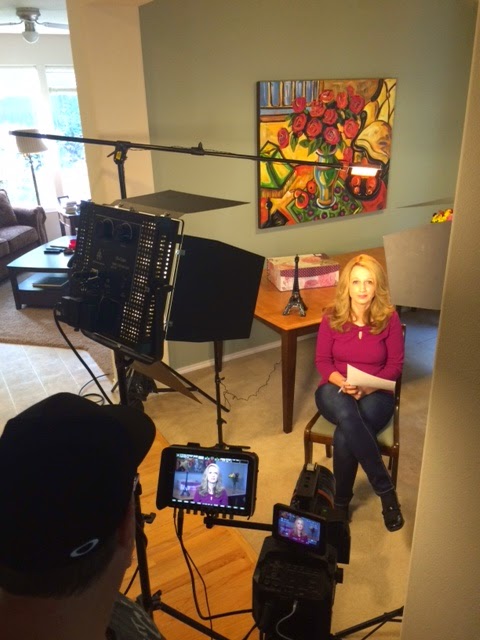 No, not that kind of video. An educational one. Come on!

Some months you just have a TV show on your calendar. Other months, you get to go to Vegas for the book festival AND have a film crew come to your house. October was fun, man. And I had my best hair day EVER (thanks to my first visit to a blow-dry bar.) Here's what I learned while filming a video segment for Scholastic to promote MY SECRET GUIDE TO PARIS. I would never make it as an actor. But it sure would be awesome to be famous and have someone blow out my hair for me every day.

I participated in National Novel Writing Month, where everyone tries to write 50,000 words in a month, but I didn't "win." I'm not a super fast drafter. I mean, I do okay, at about 1,000 words a day, but to win at NaNoWriMo, you have to do like 1,667 words a day, and that is just not me. I finished the month with about 30,000 words, so although I didn't get a badge or whatever you get (which, come on, maybe if there was a better prize, I might have tried harder to win. Write 50,000 words and get a new car! I think we need Oprah to sponsor NaNoWriMo.) I did get a good start on a new book, and for that, I'm grateful! 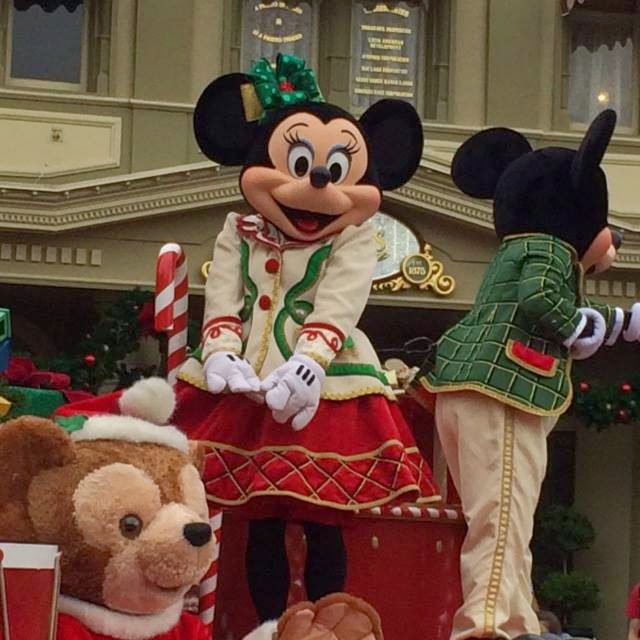 A couple of rejections in November and December made me decide to go back to work, kind of. Worrying about money sucks! Anyway, I'm now subbing for our school district, which is great because I have lots of flexibility and don't have to work if I don't want to. Have to admit, even after all this time, rejections still sting. But it's amazing what a little sunshine and warm temperatures will do for this girl's attitude. We went to Disney World for the first part of winter break and had an amazing time. I came home and got back to work. I'm not a fan of roller-coaters, the real life ones or the emotional ones, but it's part of the job when it comes to publishing. As always, it's the writing that I love, and when I focus on that, it's all good.

Looking ahead, I'm excited about the books I have coming out this year!

Happiest of new years to you, and may 2015 bring all kinds of good things your way!
Posted by Lisa Schroeder at 2:21 PM