As we approach a new year, I think back to the past year and it's kind of one big blur of writing in my mind. I mean, I wrote a LOT. How much? I'm going to break it down, month by month, so I can really see how much. Here we go! (click on the pictures if you want to see one better)

January
My fifth YA novel

Falling For You came out January 1, 2013. Blah. January releases kind of suck, if you want to know the truth. It's actually selling much better since it came out in paperback the first part of December. Someone even snapped a picture of it in a Fred Meyer store up in Washington. How exciting! Besides the release, the highlight of January was traveling to Tempe, Arizona to stay with my mom for a couple of days while I also did an event at the fabulous Changing Hands bookstore. I got to hang out with my good friend, Suzanne Young and other YA writers for a while. Writing-wise, I was working on a YA novel that I was excited about. I also had my first conversation with my Scholastic editor at the end of January about the MG series I'd be writing.

It seems I go to Vegas at least once a year. I can't help it - my girl Lindsey Leavitt lives there. So when I get the chance to go, I go. We did an all-day event with some other YA authors at one of the public libraries there. Lindsey picked me up the day before the event and she took me to Cafe Rio where I had the best taco salad of my entire life. I still dream about that salad from time to time. We made a video together for one of our favorite librarians, Sarah. I think I lost some money gambling, but I can't quite remember because I pushed that out of my memory forever, as you are supposed to do when you're in Vegas. Also in February, I did an event at Powell's on my birthday with Kimberly Derting. It was SO much fun. I really got into the game we played, in case you can't quite tell by this photo. Meanwhile, behind the scenes, I squeezed in time to work on the super sekrit YA project. I'd had some disappointment in the YA arena around another book, so I was writing a book simply for the fun of it (or so I told myself). 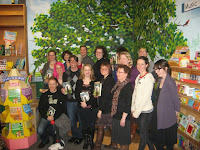 March marked the release of the YA novel Poison by Bridget Zinn, a friend and Portland author who lost her life to cancer far too soon. Her husband along with Holly Westlund and the great folks at A Children's Place Bookstore organized a fantastic multi-author signing and celebration. Over 100 books were sold, and it was just a fantastic evening. I did a few Skype visits in March and finished Book #1 in the CHARMED LIFE series.

I did more Skype visits in April, and also got out and did a live, in-person event at an elementary school  (Valley Catholic) just a few minutes from my house. I love it when that happens! My son was heavy into track at this point, so there were lots of track meets happening. On April 10th, five days before it was due, I turned in book #1 to my editor. AND, what do you know, that YA novel I was writing, just for the fun of it, sold to Scholastic. It's now titled THE BRIDGE FROM ME TO YOU and comes out July, 2014. I wrote this post after the book sold (without saying as much) about how this particular book saved me at a time when I wondered if maybe I was done writing YA. And last but not least, I turned in CHARMED LIFE #2 the end of April. Whew!

Yay, another in-person school visit this month, even closer to my house! Mt. View Middle School asked me to come and speak to the students who participated in their reading program and met their goals, and of course I said I'd be happy to do that. I talked for a little while, and then they gave away some books, sold some books, had cake, and a good time was had by all. Or so I hope. I was working hard on edits for books 1 and 2 as well as the YA novel, but I still managed to do a few more Skype visits AND get outside for some fresh air, sunshine, and tulips. All work and no play makes a writer CRANKY. Always remember this little fact. Always. 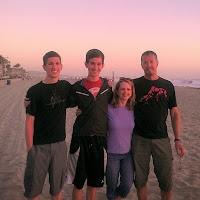 I walk my dog, Stormy, every day. Every single day, pretty much, for 30 - 60 minutes. If we haven't gotten a walk in by 3:00, she comes and tells me in no uncertain terms it's time to go. And so we do. It's good for me and it's good for her. But one day, it wasn't quite so good. She stuck her nose into a beautiful little Japanese maple tree, with leaves that hung down and touched the ground, and discovered a cat was hiding in there. The cat scratched her. At the time, I didn't realize how bad it was. But a week or two later, her eye got really awful looking. Turns out, the scratch created an ulcer on her cornea and it took many, many vet appointments trying different procedures until we finally found one that worked. She had to wear the cone of shame and have drops in her eyes four times a day for WEEKS. It was miserable. And of course, we had a vacation scheduled in June, so our friends/neighbors who had agreed to take care of her had to keep up with the cone and the drops while we were gone. The good news is we were in sunny San Diego for a week, and we had a blast. As you can tell by the smiles on our faces. I'm ready to go back. Right now. Today. Please?

I love alliteration, in case you couldn't tell. July was spent revising my face off. Lots and lots of revising, on lots of different books. I also did the Relay for Life at the end of the month to raise money to kick cancer's arse. Stupid cancer.

Lindsey came my way for a change and we went to Manzanita where we spent a few days looking out at the beautiful beach as we wrote and revised. I can specifically remember writing the first couple of chapters of CHARMED LIFE #3 while we were there. Of course, we got out of the house too, and visited the famous Haystack rock, ate clam chowder at Mo's, shopped at Cannon Beach and some other fabulous things. I also took her to the grilled cheese bus in Portland after her plane landed. Mmmmm... grilled cheese.

Another release - this time, the third and final book in the "It's Raining Cupcakes" trilogy, and my tenth book baby overall. Ten!? Kind of unbelievable. I was so busy writing and revising and retreating, I didn't even think to schedule a signing event for this book. Eep! Hopefully I will schedule something in 2014 for the new series, and if kids want to bring their books to be signed then, I'm happy to do so. I turned in book #3 this month! Only one more to go, due December 1st. Could I do it, I wondered? In the personal department, my nephew was born. He had kind of a rough start, but he's doing great now!

Along with working on the fourth and final book in the series, I did a presentation at the Oregon Association of School Librarians on Skyping with authors and also drove up to Longview, WA for Teen Read Week and spoke to teens there about how books can help us through hard times.

That I can't share yet. And lots of writing. Because the fourth book was due, remember? And of course, because that book was due, I got a new idea for a YA novel that wouldn't leave me alone. So I worked on it here and there, as I could, after I got my required writing done for the day. Um, what else? Some Skype visits. Book club. Turkey and pumpkin pie. Mmmm.... pie.

December
Ready for a nap, but it's December, and no naps allowed (unless you're a baby)

I turned in the fourth and final book on Monday, December 2nd. My editor turned around and got me her notes pretty quickly, so I revised while I Christmas shopped on-line. And still, the secret YA project called to me. It's now winter break, and I get up early every day and write while the rest of the family sleeps in. It's pretty awesome. I have 75 pages finished. I'd love to have a draft finished by the end of January, but we'll see.

So there it is. A pretty good year, all-in-all. Of course, no big awards, no best-seller lists, no movie news for me, but that's okay.  I'm doing a job I really enjoy that gives me lots of time to taxi my non-driving teens around and walk the dog every day and cook dinner every night (except Fridays, when we get pizza. Yay pizza!).

When I wrote my wrap-up a year ago, I imagined myself mostly chained to my desk for an entire year. I'm glad to see that wasn't actually the case. As I look ahead to the new year, I'm ready to fill the well in a big way. I'm hoping to take piano lessons. Work out more. Read more. Find sunny places to visit. Eat delicious taco salads and grilled cheese sandwiches with friends. I'm really, really looking forward to 2014.

If you got this far, thanks for reading! I hope the new year is filled with all of the people you love and your favorite things, and that it's a happy and healthy year for all of us!

Email ThisBlogThis!Share to TwitterShare to FacebookShare to Pinterest
Labels: a writer's life, life, year in review